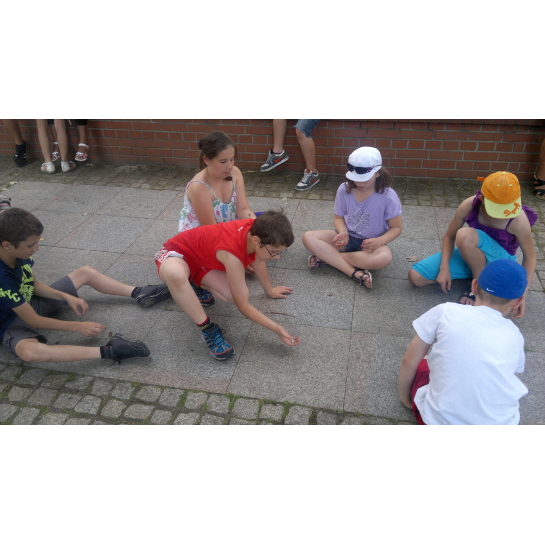 Requirements:
You can play anywhere at home, in the yard, at school, on a blanket, on a table, on the ground.

Time:
It depends on the number of players

The fun consists in tossing one stone up and simultaneously grabbing the rest from the ground and catching all in the palm of your hand. We spread stones on the floor. We choose one of them and keep it in our hands. We have to toss him up and at the same time pick up another of the spilled on the ground – we catch a stone lying on the ground so that we can catch the stone we tossed. We toss and catch with the same hand!
Having two stones in hand, we toss one of them and catch another (third) from the ground. Repeat the operation until we catch all five stones in one hand.
When we pass this stage, we start to catch in pairs. Spread four stones back on the ground and toss five up again. This time, however, while it is up, we only bring 2 stones from the ground closer to each other, grab the stone in the air. Only now, again, we throw a stone and collect two stones from the ground, we catch a thrown pebble. And again, one by one – we throw a stone, bring the other two stones nearer to each other, grab the stone.
Remember that all the time we keep in our hands all the pebbles and we throw away only one.
Then, similarly, we catch with threes and finally all four.
The last, most difficult stage is to throw out and catch rocks from the back of your hand: extend your hand, join and straighten your fingers, put stones on the back of your hand on the metacarpus, throw them all up, so as to catch them in the same hand.
If we do not catch, the next player takes the queue.