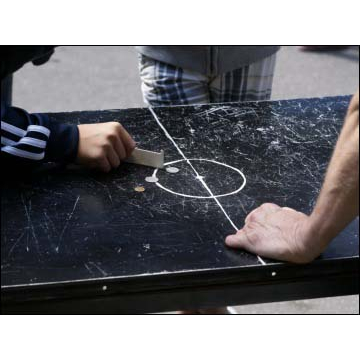 Requirements:
Any flat area
Time:
As long as we have coins
Participants:
2 people
Accessories:
3 coins, 2 lines or slats, drawing chalk
Game rules:
We draw on the ground a playground – a rectangle measuring approximately 100 cm x 70 cm and mark the gates on the opposite sides. 2 coins are our goalkeepers, the third smaller coin is a ball. We set it in the middle of the field and the players next to it. The starting player, holding the ruler in his hand, hits his coin – the footballer, in such a way that it reflects the coin – the ball. After his movement, the competitor’s turn follows. In such a cycle, players play until one of the players reaches the opponent’s goal. Goal scored is a point. After successful coin action – the ball returns to the starting position in the middle of the field. The game lasts to the previously determined number of points.